It’s been far too long since I last released a new version of John’s Background Switcher and that’s mostly been as a result of my having precious little free time to work on it. I guess the problem with developing freeware is that working on things that pay the bills (i.e. my normal job) will always be the higher priority. Anyway, my New Year Resolution this year was to dedicate more time to JBS and to build a Mac version so to start making good on that promise 4.4 is now live.

What started out as a bug fix release turned out to include a few new much-requested features and several more languages. Firstly, if you’re running on Windows 7 you can now opt to override the logon screen with your current background (have a look in ‘More Settings’):

You can now customise the fonts on postcards, polaroids, the calendar and anywhere else JBS uses fonts. Since you might want to use different fonts in different places you’ll see font buttons in all the right places in ‘More Settings’. While you’re there take a look at the ‘Montages’ section and the drop-down list highlighted below:

Also you can opt to have the postcards / polaroids placed at random angles (the default) or all straight (although still at random positions). It’s strangely refreshing to have them straight after all the years of them being at different angles!

Since you could choose a random picture mode I thought it would be handy to choose random processing effects, random snapshot scrapbook backgrounds and so on. Look out for the rolling dice – you’ll find it in most places: 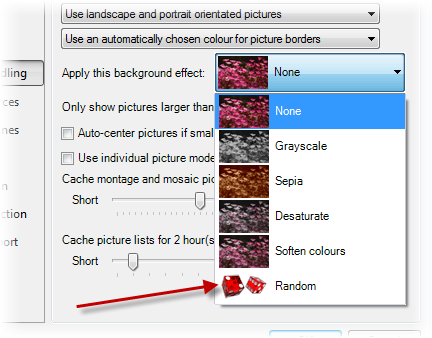 There are a host of bug fixes and other tweaks and changes so check out the full release notes for details. And then go and download John’s Background Switcher!