I’ve spent the past couple of years putting a lot of work into John’s Background Switcher but neglecting another utility I wrote called John’s Image Converter. I originally created it to provide a quick way to scale down photos for emailing and using on my website. I had some cool ideas to make it a lot more useful but never seemed to sit down and implement them.

I finally had a few spare days and evenings, put a bit of work in and am now ready to launch John’s Image Converter 2. The sales pitch goes something like this…

“Have you ever needed to quickly shrink down a photo so that it’s small enough to email to a friend? Or wanted to take a folder full of holiday pictures and resize them all at once? Or maybe you’ve seen the snapshot scrapbooks that John’s Background Switcher creates and wanted to make one from photos of your children but don’t want to change your background? Well the unimaginatively named John’s Image Converter is the answer to all of the above and more!”

One of the things people have asked for time and again was a way to convert a whole folder full of images – maybe you’ve got a bunch of photos from your fancy 10 megapixel camera and want to send them scaled-down to your friends. That would mean sending an email with 200MB of attachments or tediously resizing them one at a time. Now you just fire up John’s Image Converter, pick the folder of photos, create a new folder where you want to scale them to and set the maximum size (or percentage to resize them), click ‘Convert’ and you’re done: 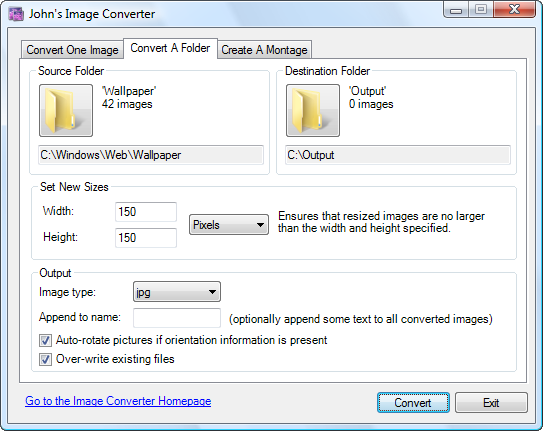 I also thought to myself that it would be quite cool to re-use the work I did in JBS to produce montage images (like snapshot scrapbooks and photo mosaics) so that you can create your own montages without having to use John’s Background Switcher (heck, maybe you just like having the same background all the time!). Now you can: 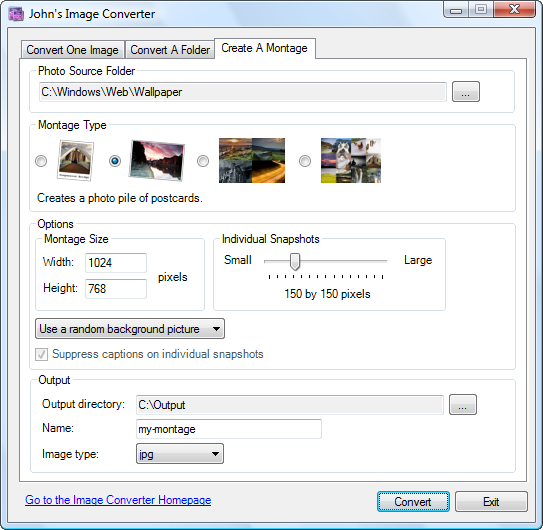 Anyway, John’s Image Converter is completely free so you’ve got nothing to lose by giving it a try. You can download it here!