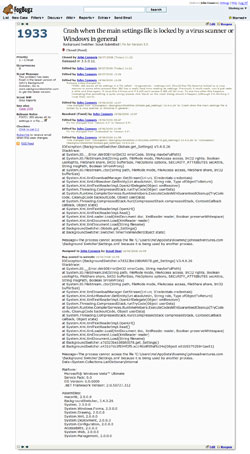 I always make a habit of fixing all known show-stopping bugs in JBS (especially crashes) before I release a new version as invariably the longer you leave these things the worse they get. So when I released version 3.4 I  patted myself on the back thinking “this is the most solid release yet”. No sooner did I think that than I found a bug in the newly implemented Facebook code that I decided to fix immediately and release (hoping nobody would notice).

I started work on version 4 and then a number of crashes came in (when JBS crashes it lets you send in a crash report that gets sent to me so I can see what went wrong – see right – it’s invaluable). There weren’t a great deal of crashes, but what was interesting was that mostly they were not for the version I’d released but from older versions people were still using – and they were crashes that hadn’t happened before. None of them happened more than 10 times so compared to the number of JBS users out there they’re pretty infrequent – but nevertheless they ticked me off.

So I decided before really getting into version 4 I’d do a bug fix release and call it 3.5 (in the meantime a few bugs did come in for 3.4 so it became well worth doing). One of the other things that’s become clear is that some first-time users can’t work out how to use JBS. Once I explain to them that you pick where your photos are stored, then define which ones to use, then a lightbulb goes off in the head and they understand. So I’ve written a short ‘Quick Start Guide’ which appears in the knowledge base and in the JBS help file. Hopefully that’ll stop me repeating myself and explaining how to use JBS!