While I don’t like to be on the bleeding edge of new technology and software, I do like to stay on the leading edge where possible so when Windows Vista was released late last year on MSDN I installed it on a machine at home, liked the look of it and then put it on my work machine (wiping the hard drive first as it needed a good tidy up anyway).

At first I liked it. The new user interface looked slick and a cut above Windows XP, the Windows+Tab 3D effect looked very nice indeed and I even liked the way the new address bar turned into buttons so going up several folder levels involved less clicking. After installing all the software I use I even got used to living with the UAC popups – although I eventually turned the whole thing off and ran as an administrator since most of my time at work is spent working with Visual Studio 2005 and IIS which both require you to run as an admin if you want to do any debugging. I know it’s “wrong” but I’ve never once had a computer virus or piece of spyware so I wasn’t concerned.

All was well for a while but as time passed I started to get more and more frustrated with Vista. For one thing, it’s significantly slower than XP. My work machine is a dual core P4 3GHz with 1.5GB of RAM so isn’t a lightweight. But run a couple of instances of Visual Studio, Outlook and a few other apps and it would grind to a halt in a way it didn’t with XP. I’d spend a lot of time looking at the ‘Grey Screen of Misery’ (right – question mark added for emphasis).

So I had to learn to be more patient between starting a debugging session and anything actually happening. I realised that if I was in a hurry I was going to get annoyed so I relaxed a bit. But then Visual Studio started to crash. A lot. And in a multitude of different ways. Like so: 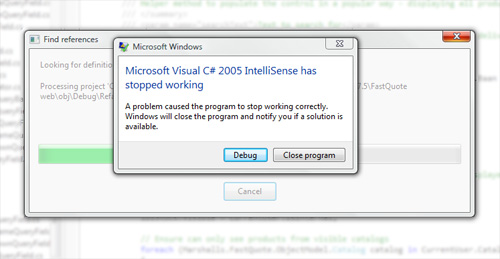 It would crash in the middle of it sitting around doing nothing. It would crash when I was debugging some code. It would crash when I closed it. When I opened it. Just any time it felt like it – and it was driving me crazy! Writing software is something that you need to be able to concentrate for extended periods of time to do well – and when your machine is flaky and falling over frequently requiring numerous reboots you just can’t get anything done. (And before you ask, it was indeed doing the same before I disabled UAC – it wasn’t spyware or a virus, it’s just the standard behaviour that I and my colleagues who installed it came across). I even went as far as to completely uninstall Visual Studio and put it all back on again. No change.

Vista’s nifty feature of being able to check for problem solutions from the web wasn’t very handy either (right). As with most things that don’t work when you’ve tried them numerous times I gave up checking for solutions when it never found any.

I started considering wiping my work machine and re-installing XP and the more crashes I came across doing my day job the stronger my feelings got. Eventually I had a bad day where I got hardly anything done and I actually had a lot of work to do but every time I started something Visual Studio crashed and I had to almost start again. I cracked and copied all my documents onto an external hard drive. The next morning I got out an XP SP2 CD and put it back on.

Here I am a week later and I don’t regret my move one bit. XP is much faster, Visual Studio is rock solid again and hasn’t crashed once. I can safely say that while there are indeed some really nice new features to Vista (I’ll probably write about them once the bitterness has gone), I don’t miss anything at all about it. Not a thing. I’ve read about loads of problems with Vista and graphics cards, other pieces of hardware, iTunes and that sort of thing but my work machine really only has Visual Studio, Outlook and a couple of web browsers running. Nothing special and no on-the-edge hardware. And yet myself and my colleagues who took the plunge have found that Vista just doesn’t cut it as a day-to-day development system. What finally made me roll back to XP was the fact that the other developers who stuck with XP weren’t having any crashes at all.

I can only join the chorus of people who say that Vista really isn’t worth upgrading to for the time being if you’re a software developer. I’ll mention that my good lady’s laptop – which is used exclusively for surfing the internet – is running Vista and has been as solid as a rock since I installed it, so I’m not saying Vista isn’t ready for most people’s uses. It just isn’t ready for mine, or anybody who does the same sort of work as me.

See, I wrote a whole post about Windows Vista and never once mentioned how much more I love my Mac. That’s for another day! 😉