As a recent convert to the game of cricket I jumped at the chance to attend a ‘Sportsman’s Dinner’ (through work) at Elland Cricket Club where none other than the Ashes-winning and current England cricket captain Michael Vaughan would be speaking. And what a fun night it was too!

I’ve never been to this sort of corporate thing before but it was an interesting experience. There were about 150 people there including 14 from my company. Dinner itself was rather nice. There was a raffle, a variation on the game ‘Play Your Cards Right’ to win a flat-screen TV, the auction of some very impressive sports memorabilia (including a signed, framed Ronaldinho shirt that I was sorely tempted to bid on – which went for £500 in the end and would have looked lovely in my lounge) and the very talented impressionist Kevin Connelly rounded off proceedings. But the bit I was most interested in was of course hearing Michael Vaughan talk.

Former England physio Wayne Morton was the compere for the evening and he’s the man who helped Michael Vaughan through his knee injury so knows him well and interviewed him up on stage. Michael was very open and honest (much more so than in a press interview) and didn’t dodge any questions he was asked by Wayne or people in the audience. He came across really well and to be honest I could have listened to him all night! As with most elite sportsmen he has a very positive, winning attitude but the way he talked about leadership and how he conducts himself as England captain was a fascinating insight into his mindset. You can see why a team of players would want to follow him.

His enthusiasm and the way he said that he goes out to play for his country wanting to enjoy it – remembering that he was once a kid playing in the nets dreaming of the moment – came across as completely genuine. He’s a top bloke worthy of a great deal of respect and despite the fact that he’s playing on Friday for England he was happy to sit and sign autographs, have photos taken with messy-haired Scotsmen and stay late into the night. 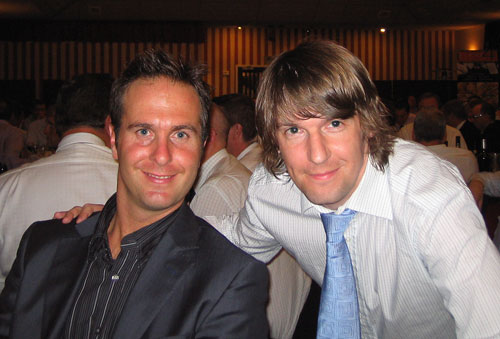 The press and those reading what gets written often forget that these people are humans just like you and me with feelings and personalities – they just happen to be exceptional at something. In Michael Vaughan’s case it’s cricket and leadership. Great guy and a model professional.