I’ve had the weight of John’s Background Switcher 3 on my shoulders for the last 6 months or so and I’m glad to finally say it’s done, it’s out there and now I can have a rest from it all! In my opinion it’s vastly superior to all previous versions and has some really cool features including being able to create montage images and choose from lots of photos sources on Flickr, Phanfare, Yahoo! or your local computer. I’ve put a great deal of thought into each feature and it’s implementation and never compromised my initial design goal which was to “keep it simple”. 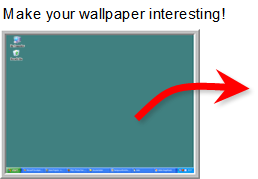 One of the things people probably don’t realise when you develop software in your free time is just how much work it is and how much it can take over your life. JBS consists of over 30,000 lines of code and for version 3 I completed over 130 pieces of work ranging from 5 minute bug fixes to multi-day new features. Since I have a day job and a private life, I’m only left with evenings and weekends doing this work which means it’s slow progress compared to working full time on it. It has meant many late nights staring at a computer screen having spent all day at work doing exactly the same thing.

I’m not complaining though – I really enjoy working on it and love getting emails from people saying how great they think JBS is and how much they’re enjoying using it. I don’t charge money for using it because it’s a labour of love and to try to make money out of it would sour the experience somewhat for me. Also, I use the software myself so at the end of the day I’m really writing it for me and can therefore make it exactly the way I want it!

A few weeks ago I still had a long list of things I wanted to put in JBS 3 but I was starting to realise that without a release date in mind I’d potentially be working on it forever. I also knew that the number of people uninstalling JBS 2.5 who filled out the uninstall feedback form that comes up were asking for features I’d already implemented in 3.0. So I decided I wanted to release 3.0 by the first week of April and cut features accordingly from my list.

With this goal in mind I worked a few late nights and weekends to get it done – I even dedicated a full 4-day bank holiday weekend to it! I updated the documentation and tentatively put the final version up live waiting for things to go wrong. JBS checks for a new version every 4 days (unless you turn that option off) which is handy as it means that rather than everyone updating at the same time, it takes a few days for it to happen. This means if some critical bug suddenly turns up I can fix it and put up a new version before too many people have downloaded it. I had to do this twice with 2.5 and expected to do the same this time. Except it hasn’t happened.

If JBS crashes it gives you the option to send in a crash report and that gets directly fed into my defect tracking software. I can then figure out what caused the problem, get the frequency of crashes and decide if I need to roll out a new version. Thus far I haven’t had a single crash report for version 3. I know it works as during beta testing I had many crashes crop up but frankly I’m amazed I’ve not heard anything live. I’ve also not had anyone emailing me about problems which again is very surprising. Hopefully I’m not just experiencing the calm before the storm!

A great deal of credit must go to the people mad enough to have joined in the beta testing of JBS. I can’t thank them enough as I’d quite often be releasing new betas every day or so and to have people other than me testing them out and giving me feedback is priceless. When you test your own software you tend to look at it through rose tinted spectacles and only test it in the way you designed it. Other people will naturally use it in a completely different way and do things you wouldn’t think of and this sort of testing massively cuts down on the number of potential problems you’ll hit. So thanks to you all! 🙂

Anyway, if you’re on a Windows computer and you’re sick of your boring, static background, then you owe it to yourself to go and install John’s Background Switcher! Now, I’m going to go and relax away from a computer screen for quite some time!