This is the eighth in a series of articles discussing some of the photography techniques I’ve learned and employ when I’m out on a shoot.

There’s a single photograph that sparked my love of photography and it’s pictured right.

My father had a book called ‘The Complete Kodak Book Of Photography’ published back in 1998 that I used to look at which captured my imagination. I say ‘had’ because it’s now sitting on my bookshelf and has done for some years (sorry dad!).

It’s a book that masquerades as an information resource for budding amateur photographers but frankly it’s just filled with amazing photos taken by photographers whose lenses I’m not fit to clean. I look at it now really appreciating how good some of them are but also understanding what makes them so good. I’ll admit I was initially drawn to the nude photography section but it was the photo above that really piqued my curiosity (and I’m sticking to that story!). It is in fact a long exposure (probably just a couple of seconds) and that’s why the water has that ethereal look to it.

When I first took my photography to the next level by heading out with my friend Ade and learning from him, I really wanted to recreate a shot like the Kodak one. Luckily I live in Yorkshire which has more than its fair share of rain and therefore waterfalls. And everybody loves waterfalls! Here’s what I’ve learned about photographing waterfalls…

The best conditions to take pictures of waterfalls happens to be dark, cloudy and preferably miserable days. It just so happens that Yorkshire has a surprisingly high proportion of such days. My aim when photographing a waterfall is to create a long enough exposure (in the order of several seconds) such that I capture the flowing, soft look of the water without it burning out – i.e. the water appearing completely white and therefore devoid of detail. This is why sunny days are no good, the water is so brightly lit by the sun that if you expose correctly for the water (which I’ll mention in a moment) the background will be far too dark. Firstly, here’s probably the best shot of a waterfall I’ve taken and it wasn’t difficult to do:

This is Scaleber Force near Settle and it was a truly miserable day. It was cloudy, dark, raining on and off, the ground was muddy and slippery underfoot and nobody else was within miles of us – they were either at home or in the pub. Perfect waterfall weather! Since it was so dull and the light flat I was able to get the smooth flow of the water and have a long enough exposure so that the background was also bright enough to make out.

Right, so the objective is to have as long an exposure as possible (well, longer than a second or two). This means as low an ISO as you can get (for maximum quality) – 100 in my case. You need as narrow an aperture as you can get without losing quality to cut down on the light entering and maximise the depth of field – f16 is probably the best compromise unless you have a really nice lens although I usually just go with f22 – I’m not doing A1 prints! A circular polariser cuts down on the amount of light reaching the lens (they’re great on a bright day for cleaning up light but that’s irrelevant here) and any other filters you can fit on to cut down on the light help too. I had a 3 ND grad on for improved darkness. Then it’s a matter of composing the shot – you may need to remove the filters so you can see through the viewfinder! The composition is up to you, it depends on the waterfall, the surroundings and many other things – it’s best to try as many different angles as you can and see which works when you get home. 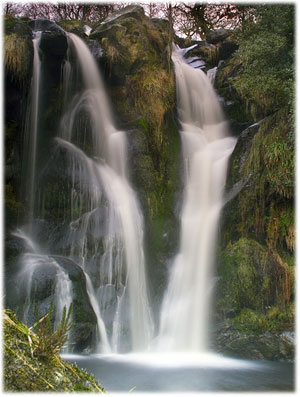 Then you need to take a meter reading and set the exposure time. As I mentioned in my piece on exposure the best way to set your exposure is with spot metering (or partial metering if your camera doesn’t have it). So  zoom in to the waterfall itself, point at the brightest part and take a reading, adjusting the exposure time until the meter reckons it’s 1/3 – 2/3 of a stop underexposed. That way you’ll know you won’t burn out the highlights of the waterfall. I prefer shots to be underexposed so I can dodge them later in Photoshop if they need a bit if brightening, I find that over-exposing and trying to darken them later yields lesser results, but that’s just me.

Click the shutter button on your cable release (you don’t want to move the camera and blur the shot by pressing the button on the camera do you?), step back and look around while the shot’s taken. Maybe you could look for other interesting angles to pass the time (it can be quite tedious standing around for 30 seconds while a shot is taken). Have a quick look at the histogram on the camera and the preview to make sure it looks properly exposed and carry on! Don’t delete any if they look terrible though, those preview screens are no good at measure quality, it’s not until you get back and look on the computer that you know if you have any crackers.

Technically waterfalls are pretty straightforward to photograph if you have dull lighting conditions as long as you take your meter reading from the brightest part of the water. The tricky part, as always, is composing a picture that makes people wish they were there and fires their imagination. Just like that photo from my dad’s book did all those years ago for me.

Next: Black and White or Colour?