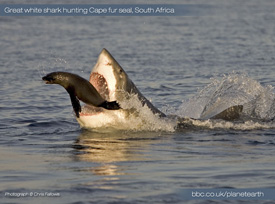 The best TV program I’ve seen in years is without a doubt ‘Planet Earth‘ by the BBC. As far as I’m concerned programs like this are worth the license fee alone (to be honest it’s one of the very few things I regularly watch).

It’s a nature program narrated by David Attenborough showing the wonders of the planet on which we live. It’s years in the making and contains some of the most incredible footage of the natural world you’re ever likely to see. This week showed great white sharks (above) attacking fur seals off the coast of South Africa in super-slow motion. You just can’t believe how quick, aggressive and powerful these sharks are – weighing over a ton and yet exploding completely out of the water without warning like lightening. Truly amazing.

But at the end of each episode I always feel a bit sad, almost emotional. Watching programs like this shows what an incredibly diverse, beautiful and awe-inspiring planet we live on. But it’s fragile. And the sad fact is that in a matter of generations – the mere blink of an eye geologically – a great deal of these wonders will be gone.

No amount of reducing greenhouse gasses, cutting down on the usage of fossil fuels, recycling or any other initiative will change the fact that this planet is on dodgy ground thanks to us. You can forget some Star Trek Utopian world where everybody does what’s in the best interests of humanity rather than themselves suddenly appearing because in the last 5000 years human nature hasn’t changed at all. We may have nice technology but we’re still barbarians at heart.

You can also drop that idea of space colonisation. Even if there were a planet in the solar system or within easy reach that could support life, we wouldn’t be able to survive there. We’ve had millions of years of evolution that have allowed us to cope with the bacteria and viruses that are ever-present on Earth. The same won’t be said for another planet with a different set of bacteria – think War Of The Worlds only we’re the aliens – same result. You reckon we could be inoculated? Ha! You’ve been watching too much Star Trek: The Next Generation – I’m afraid 21st century medicine is little more effective than that of the 19th century.

And even colonising the moon or Mars is a bit far-fetched. You wonder why manned missions to Mars have been put off for so long? One of the big problems is cosmic rays that are un-stoppable and long term exposure is little understood, but irreversible damage to human DNA is one of the known side-effects. We’re okay on Earth since the atmosphere soaks up most of it, but these rays cut through metal and space suits like a hot knife through butter.

So we’re stuck here. And unfortunately as long as we’re here the natural wonders on this planet are under threat. I’ve been saying for years the best thing that can happen to the Earth is if all the people are removed from it. And that’s why I’m always a bit sad after watching nature programs – we started out as one of the most wonderful creations on this planet and now we’re destroying the lot for our own selfish, short-term gains. Shame on us all.